Patriotism has been bandied about in loud, thumping beats in Bollywood songs, so when Shankar Ehsan Loy bring a toned down simmer to the feeling, it is more than a welcome change.

Prasoon Joshi returns to lyric writing, though in a tad persuasive manner. The song borders on propaganda, but goes with the movie's tone.

Now it may sound almost horrifying that someone wants their nerves to be made into a sitar and played. That the love for the country must splash from the eyes is another strong slogan here, what Joshi is referring to is the need for sheer intensity.

From the heart
Shankar Mahadevan sounds pure, connected and straight from the heart conveying the message across. Moving seamlessly from low to high, there is a clarity and cleanness to the rhythm. The chorus is also judiciously used, no loud culmination here.

Despite the whiffs of propaganda, Bharat is an impressive song for a period movie soundtrack, showing the music director trio's subtle talent and skill. The Manikarnika soundtrack is worth a listen too.
Posted by Snehith Kumbla at 09:32 1 comment:


Padmaavat"s writers and director are clearly guilty of taking sides, but the soundtrack, without exaggeration, is a work of genuine beauty. Ek Dil Ek Jaan is a gem in the impressive six-song Padmaavat soundtrack, exhaling love in its purest form.

Shades of Bajirao Mastani
Shivam Pathak varies his gruff-riotous vocals of Khalibali to an impressive drawn out, lingering degree here.

Despite shades of the Arijit Singh sung Aayat from Bajirao Mastani (2015), how Ek Dil Ek Jaan sways momentarily to a clipped qawwali piece is as organic, if not better. In fact, Bhansali repeats Mujtaba Aziz Naza and Farhan Sabri vocals as in the Aayat qawwali section, lyricist AM Turaz is another common factor.

Instruments, Magic
Apart from the lead vocals, the rousing, mini, qawwali interlude, the magic stems from the drawn-out quality, silence between the notes and excellent pacing. The sound design is a work of perfection here, as is the aptly placed collage of instruments. Sample the initial wind chime tinkles, and how it builds up to the wisely understated clap rhythms. I love the sarangi touches the most, it adds the necessary melancholia. 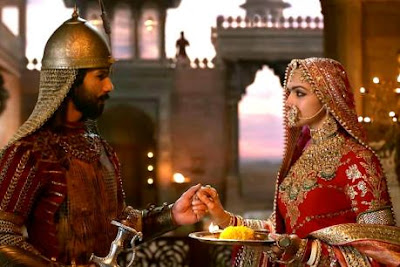 Fleeting Cinema
The lyrics, despite the love song trappings, emits the sweet pain of parting and fits piognantly well into the film's audio-visual context.

Bhansali is guilty of overplaying the Ratan Singh-Padmavati 'adorable glances' part. But for a few moments, as the enemy annnounces its thunderous presence, the last goodbye between lovers feels like a golden thread stiched in embriodery. A fleeting moment, yet a glimpse of cinema.
Posted by Snehith Kumbla at 06:16 No comments:


Although Khalibali sticks out like a sore thumb in the Padmaavat storytelling structure, as a purely audio experience it is individually distinct for its mid-eastern flavor and deranged celebration from the rest of the soundtrack.

For those unaware of Hindi film formula, you may well ask, when did Alauddin Khilji learn to dance like that?! Khalibali comes out of the blue in the film. Nor does Alauddin's onscreen lustiness compliment the song's lyrics, there is a clear disconnect. Did the violent anti-film protests affect creative freedom on the songs too? Or is it merely an entertainment gimmick, to give the audience a more likable villain?

Ranveer Singh's mere presence sparks up the audio-visual. Otherwise, the song is more of a filler, and suddenly Padmaavat looks like a musical. They might have made a full-fledged musical out of Padmaavat, considering the superb Sanjay Leela Bhansali compositions, Shahid and  Deepika's dance skills, it would have been lovely to watch.

Khalibali stands for chaos, and explains the king's state in a repeated rousing chorus:

(all strings of the heart are severed,
the fireflies of sleep had a tiff with the night)

At the time of writing, the 21-minute-odd run of the Padmaavat soundtrack is sounding rousingly impressive and epic on repeated listens. We may have our first great Hindi film soundtrack of 2018 in Padmaavat. More of that in subsequent posts. Until then, happy listening!
Posted by Snehith Kumbla at 00:02 1 comment:

Bollywood Songs Of the Week